Indigo : arm wrestling, snake saving, and some things in between / Padgett Powell. 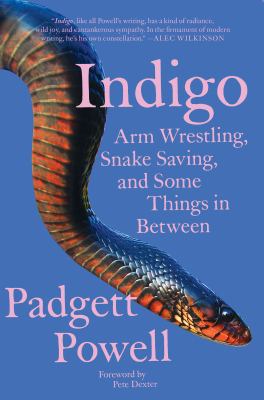 Indigo : Arm Wrestling, Snake Saving, and Some Things in Between
by Powell, Padgett
Rate this title:
vote data
Click an element below to view details:

Indigo : Arm Wrestling, Snake Saving, and Some Things in Between


The first collection of nonfiction by "one of the few truly important American writers of our time" (Sam Lipsyte). Gathering pieces written during the past three decades, Indigo ranges widely in subject matter and tone, opening with "Cleve Dean," which takes Padgett Powell to Sweden for the World Armwrestling Federation Championships, through to its closing title piece, which charts Powell's lifelong fascination with the endangered indigo snake, "a thinking snake," and his obsession with seeing one in the wild. "Some things in between" include an autobiographical piece about growing up in the segregated and newly integrated South and tributes to writers Powell has known, among them Donald Barthelme, who "changed the aesthetic of short fiction in America for the second half of the twentieth century," and Peter Taylor, who briefly lived in Gainesville, Florida, where Powell taught for thirty-five years. There are also homages to other admired writers: Flannery O'Connor, "the goddesshead"; Denis Johnson, with his "hard honest comedy"; and William Trevor, whose Collected Stories provides "the most literary bang for the buck in the English world." A throughline in many of the pieces is the American South--the college teacher who introduced Powell to Faulkner; the city of New Orleans, which "can render the improbable possible"; and the seductions of gumbo, sometimes cooked with squirrel meat. Also here is an elegy for Spode, Powell's beloved pit bull: "I had a dog not afraid, it gave me great cheer and blustery vicarious happiness." In addressing the craft of fiction, Powell ventures that "writing is controlled whimsy." His idiosyncratic playfulness brings this collection to vivid life, while his boundless curiosity and respect for the truth keep it on course. As Pete Dexter writes in his foreword to Indigo , "He is still the best, even if not the best-known, writer of his generation."
► Shelf Browser
► MARC Record