Whereabouts / by Jhumpa Lahiri (written in Italian and translated by the author). 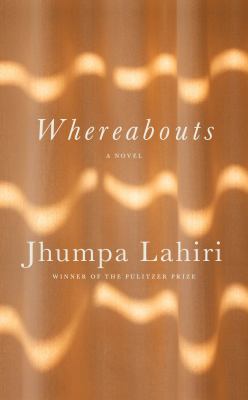 Whereabouts : A Novel
by Lahiri, Jhumpa
Rate this title:
vote data
Click an element below to view details:

On the Sidewalk In the mornings after breakfast I walk past a small marble plaque propped against the high wall flanking the road. I never knew the man who died. But over the years I've come to know his name, his surname. I know the month and day he was born and the month and day his life ended. This was a man who died two days after his birthday, in February. It must have been an accident on his bike or his motorcycle. Or maybe he was walking at night, distracted. Maybe he was hit by a passing car. He was forty-Â­four when it happened. I suppose he died in this very spot, on the sidewalk, next to the wall that sprouts neglected plants, which is why the plaque has been arranged at the bottom, at the feet of passersby. The road is full of curves and snakes uphill. It's a bit dangerous. The sidewalk is vexing, crowded with exposed tree roots. Some sections are nearly impossible to negotiate because of the roots. That's why I, too, tend to walk on the road. There's usually a candle burning in a container of red glass, along with a small bunch of flowers and the statue of a saint. There's no photograph of him. Above the candle, attached to the wall, there's a note from his mother, written by hand, encased in a milky plastic sleeve. It greets those who stop for a moment to ponder the death of her son. I would like to personally thank those who dedicate a few minutes of their time to my son's memory, but if that's not possible, I thank you anyway, from the bottom of my heart, it says. I've never seen the mother or any other person in front of the plaque. Thinking of the mother just as much as the son, I keep walking, feeling slightly less alive. On the Street Now and then on the streets of my neighborhood I bump into a man I might have been involved with, maybe shared a life with. He always looks happy to see me. He lives with a friend of mine, and they have two children. Our relationship never goes beyond a longish chat on the sidewalk, a quick coffee together, perhaps a brief stroll in the same direction. He talks excitedly about his projects, he gesticulates, and now and then as we're walking our synchronized bodies, already quite close, discreetly overlap. One time he accompanied me into a lingerie shop because I had to choose a pair of tights to wear under a new skirt. I'd just bought the skirt and I needed the tights for that same evening. Our fingers grazed the textures splayed out on the counter as we sorted through the various colors. The binder of samples was like a book full of flimsy transparent pages. He was totally calm among the bras, the nightgowns, as if he were in a hardware store and not surrounded by intimate apparel. I was torn between the green and the purple. He was the one who convinced me to choose the purple, and the saleslady, putting the tights into the bag, said: Your husband's got a great eye. Pleasant encounters like this break up our daily meanderings. We have a chaste, fleeting bond. As a result it can't advance, it can't take the upper hand. He's a good man, he loves my friend and their children. I'm content with a firm embrace even though I don't share my life with anyone. Two kisses on the cheeks, a short walk along a stretch of road. Without saying a word to each other we know that, if we chose to, we could venture into something reckless, also pointless. This morning he's distracted. He doesn't recognize me until I'm right in front of him. He's crossing a bridge at one end and I'm arriving from the other. We stop in the middle and look at the wall that flanks the river, and the shadows of pedestrians cast on its surface. They look like skittish ghosts advancing in a row, obedient souls passing from one realm to another. The bridge is flat and yet it looks as if the figures--Â­vaporous shapes against the solid wall--Â­are walking uphill, always climbing. They're like inmates who proceed, silently, toward a dreadful end. "It would be great, one day, to film this procession," he says. "You can't always see it, it depends on the position of the sun. But I'm always amazed, there's something hypnotizing about it. Even when I'm in a hurry, I stop to watch." "So do I." He pulls out his cell phone. "Should we try?" "How does it look?" I ask. "No good. This contraption can't capture them." We continue to watch the mute spectacle, the dark bodies that advance, never stopping. "Where are you headed?" "Work." "Me too." "Should we have a coffee?" "I don't have time today." "Okay, ciao, see you soon." We say goodbye, separate. Then we, too, become two shadows projected onto the wall: a routine spectacle, impossible to capture. Excerpted from Whereabouts: A Novel by Jhumpa Lahiri All rights reserved by the original copyright owners. Excerpts are provided for display purposes only and may not be reproduced, reprinted or distributed without the written permission of the publisher.
► Shelf Browser
► MARC Record