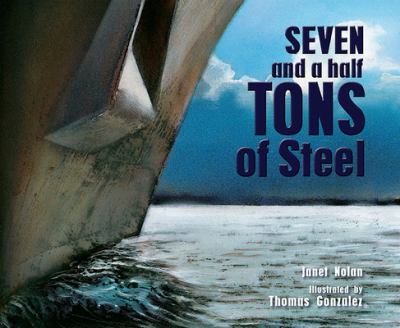 View all formats and editions (4)

Seven and a Half of Tons of Steel
by Nolan, Janet; Gonzalez, Thomas (Illustrator)
Rate this title:
vote data
Click an element below to view details:

Seven and a Half of Tons of Steel


The USS New York is big like other navy ships, and it sails like other navy ships, but there is something special about this navy ship. Following the events of September 11, 2001, a beam from the World Trade Center Towers was given to the United States Navy. The beam was driven from New York to a foundry in Louisiana, where the seven and a half tons of steel, which had once been a beam in the World Trade Center, became a navy ship's bow. Powerful text from Janet Nolan is paired with stunning illustrations from New York Times best-selling illustrator Thomas Gonzalez (14 Cows for America) in this inspiring story that reveals how something remarkable can emerge from a devastating event.
► Shelf Browser
► MARC Record